Posted by admin on October 24, 2010
in Outdoor Projects

Nearly done.  We have the balusters and handrails up. 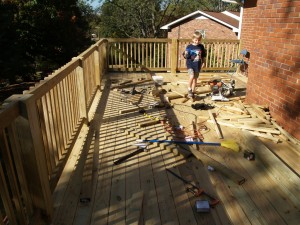 Here’s a picture of the balusters and rails up. There was only about 10 balusters left over.

We finished up putting the handrails today.  I started putting up 2x6s but it just didn’t look right being the exact same width as the posts.  So we went to the store and bought 2x8s instead.  That had almost too much overhang though so I ended up ripping each down by about 1/2″ to get a better look for the overhang. 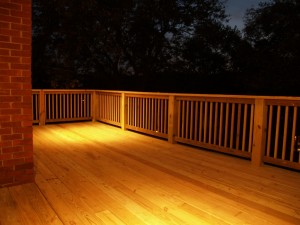 Here’s the deck, cleaned up with the handrail on. I still need to rout a round-over along the rail where the the edge is too sharp where I ripped off the 1/2″ to make the overhang look right.

I still have a lot of sanding to do on the apron/face board which still has a bit of red on it.  Hopefully by the time I have that all cleaned up the treated boards will all be sufficiently dry in order to be stained. 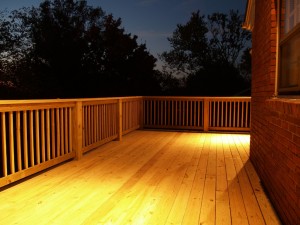 View from the other direction of the finished railings and decking with all the extra scrap wood removed.