Hole In the Wall

Posted by admin on January 29, 2011
in Uncategorized

My mom apparently doesn’t like washing dishes while staring at the wall.  She requested that a hole be put in the wall that divides the kitchen from the living room which is a good idea.  Mark and I spent most of a Saturday tearing into it and getting it roughed in with a first coat of mud. 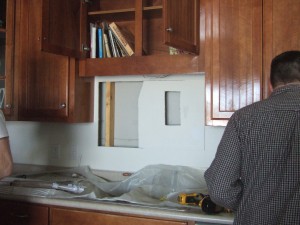 Here’s the starting hole above the sink. We ran into 2 electrical runs in the wall, which prompted an emergency call to Wendy for assistance. We’d left all our electrical tools and supplies at home… whoops!

After Wendy brought all the electrical stuff and we re-routed the runs to the left of the holes in the attic, we really got underway.  I didn’t take pictures of the progress, but Wendy remembered a technique from a “This Old House” episode where cuts were made lower into the drywall to accommodate the incoming studs for the frame.  It worked out pretty well! 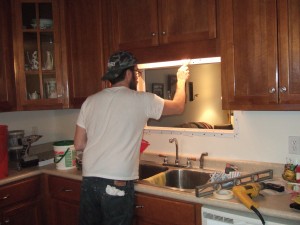 We used vinyl corner bead that you can see around the edges to protect them if they get bumped. I really like the stuff. The only trick is getting it to lay as flat as possible by making nice and neat corner cuts and not nailing it in too tight. I’ve decided that drywall screws just don’t work that well with the vinyl bead.  Here’s Mark starting to apply the mud over it.

After he finished the coat of mud, we decided to call it quits for the day.  Here’s  pictures from both sides. 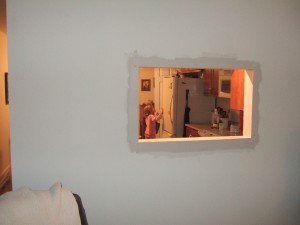 Who’s that messing with the fridge in there? 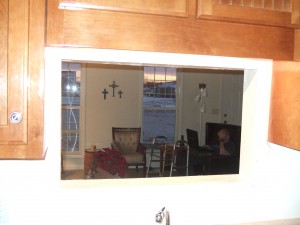 View from the kitchen, which “opens it up” according to Mom.

To get a little bit more space for something like a plant or whatnot, we thought about putting a wood shelf in the bottom part.   Mom sent a construction paper template to me and I started working on it.  I found a 9″ wide piece of rough oak in my pile of wood.  I planed it down to a little over 3/4″ in cut it to an 8″ width and to length that she had specified.  After confirming some of the dimensions with her on the phone, I finished up the notches on each end, put on a 1/4″ radius.  After sanding it with my old random orbit sander which I just got a replacement pad for, I put on the first coat of poly. 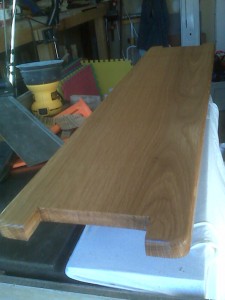 White oak with one coat of finish.

I just hope it fits nicely…