Posted by admin on December 5, 2010
in Uncategorized

Yesterday my brother and I took the folks to their new house so they could check it out for the first time and so we could install the steps and handrails that I had made to replace the broken ones.  My sister was there to meet us and she had pulled the old steps out of the way.   Luckily for us, the new stringer and treads mated perfectly to the 2×4 pieces that were originally on the house to hold the previous steps to the house.   We set to screwing on the hand rails after that.  It all did fit quite well.   We used a cordless impact driver that I got for my birthday a few days earlier.  It was noisy, but set the deck screws in nicely without stripping out the bit or the screw heads.  I’ll maybe do a post later comparing it to my old drill that I used for most of the deck.

My brother took this picture of me sanding down the handrails. 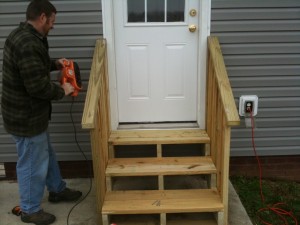 After getting a bunch of splinters most every night when working on my deck, I wanted to make sure that the handrails would be nice and smooth for them!