Planning – the Key to Success

Posted by admin on February 22, 2011
in Uncategorized

I know you’ll probably consider this a little backwards, but I thought I’d show the planning for the hole in the wall for some of my most recent posts after the project is done.    Planning for projects is a must… even if at the expense of spontaneity.  Even something as simple as cutting out the hole in the wall can benefit from having a good, detailed plan.  I had put in a bit of effort in re-creating the environment in Sketchup, mainly for two reasons.  The first was to get an idea of the proportions of the opening to make sure it “felt” right.  The second reason was to identify where the studs were in the wall and to consider how we could frame it in.  I think the actual result ended up pretty much as planned!  Here’s some pictures exported from the Sketchup program.

Hole Size and measurements of the wall, studs and cabinets – viewpoint from the kitchen: 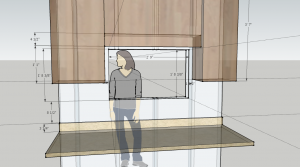 I ended up sending the picture to my mother prior to my brother and I beginning the work. I thought it was interesting that she felt the woman included in the rendering confused her and made it difficult to see how it would end up. Maybe it was because I had the wall somewhat transparent…

I suppose I could have tried to layout the walls for both the kitchen and living room, but I really just wanted to focus on the area where the work was going to happen and the size of the cabinets.

I always like to print out hard copies of the sketches to have on hand to reference and make notes on when I’m working.

Even though it is a “tool” to help with all these projects,  I still just can’t bring myself to use my laptop in the garage where things like paint, sawdust, dirt and oils seem to get on everything.