Well, after mowing today I decided to hook up the aerator for a few spins around the yard.  It rained yesterday so the ground is nice and soft which probably helps. Here it is hooked up to my tractor.  You can see my son’s shoe in the upper right corner of the picture… now how did that get in there?!

I know that the cardboard will eventually disappear, but that’s ok.

Yeah, you’re right. It’s already starting to rust already.  I had contemplated painting it, but for some reason I like the idea of old farm implements “weathering and rusting” out in the field and kinda decided to leave it bare and see what will happen to it.  It might be a tetanus accident waiting to happen, but I’m thinking the nails will rust too and paint won’t stick to them after a few laps around the yard, so what’s the point anyway. 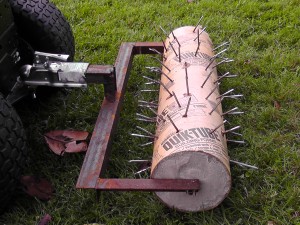 Here’s a view from the side. One thing I’ve found out is that some of the nails don’t take rolling over concrete too well.

I suppose if I ever made a second unit, I would shorten the nails slightly and put more of them in it to help it roll over the concrete better. 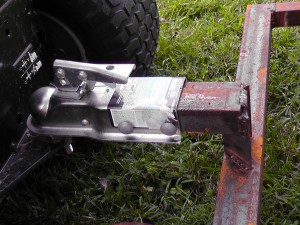 Yeah yeah, those are some pretty ugly welds, but I don’t think the grass is really gonna care.

Ok.  I did not have the hitch laying around the garage.  I actually bought that at Home Depot, and for the last picture, I better show the rest of the parts that I had to specifically buy to put this thing together.

Here’s the side view where you can see the other purchase I had to make (axle rod and washers). I used some axle grease that my brother had on hand and the thing spins quite freely!

Here’s a video clip of it in action that my son recorded!