Posted by admin on June 19, 2011 with No Comments
in Outdoor Projects

I finally have 3 coats of stain on the deck.  I ended up waiting a while – like half a year, as this seemed to be the stronger argument out there on the Internet for when or how soon to stain a deck. It seemed to really suck the stain up and so I’ve decided to try to quench it’s thirst and have gone over most of the horizontal surfaces 3 times using the Olympic brand of stain.  I really like how the water beads up now after a rain… 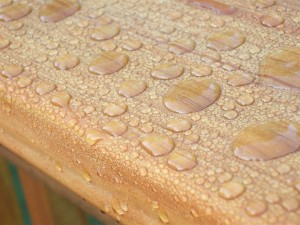 The beads of water are almost like a magnifying glass. 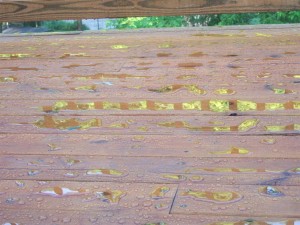 Also makes for some neat reflections as well.

Ohh.. and by the way, you may have noticed that the site is a different URL/domain name now instead of “junkwood.info”…  I’m just being thrify as the renewal price isn’t as attractive the 2nd year, so I opted to get a different one.  Hopefully this doesn’t mess you up too bad if you’re following along..  I tried to force the old site  to automatically forward to the new “junkwood.info” name.

And to further prove how cheap I’ve become, I’m planning on posting next on the home-built lawn aerator that I “built” from junk I had mostly laying around in my garage and my brother’s.    😉

Posted by admin on April 22, 2011 with 1 Comment
in Outdoor Projects

Ok.. I know that this isn’t a real woodworking post, but I thought it might be interesting to see the Top Bar Beehive my brother and I built in some of the previous posts in action, so here’s a video of it for you to check out.  My brother added some metal legs, a roof, and of course some bees to it.

I’m no expert, but it sure seems to “bee” working just fine!

Posted by admin on April 2, 2011 with No Comments
in Uncategorized

The weather was finally perfect today so I pulled out the power tools and set to making the printer stand that I had planned out in Sketchup. 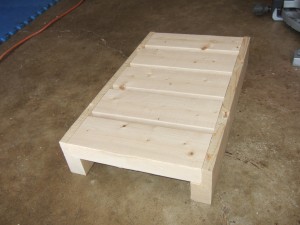 Here’s the top portion. The sides have a rabbet in them to provide more stability than just screwing them from the sides alone.

I saved the left over pieces from the rabbet and decided to use them for the braces farther down the legs. 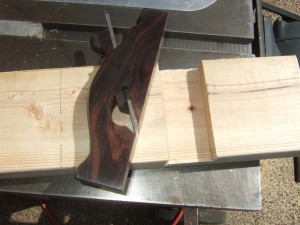 I have to admit, it almost felt criminal using the Japanese shoulder plane that my wife got me for Christmas on common old pine in order to smooth out the dadoes. I really think it should be kept for nicer hardwoods..

Luckily the other parts were wider and I could use the cheapo surform plane  for them. 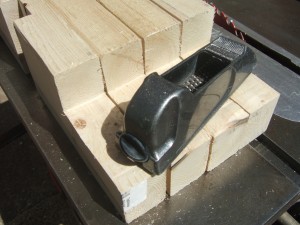 That’s a lot better. Yeah I know, it doesn’t come out as smooth, but this stand is strictly for utility purposes anyway…

I like using a big rafter square for squaring up things.  Maybe just the plastic is nicer to hold than cold metal on a cool morning. 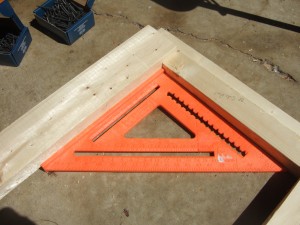 Big and orange. At least it is easy to find!

I could have gotten away without countersinking in the screws, but it does make things look a lot nicer.  I suppose it helps control the wood from splitting a little bit. 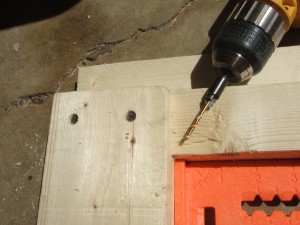 I can’t tell you how much I use these cheap countersink bits. I think it was probably one of the very first things I bought at a Harbor Freight store at least 8 years ago. Someday I may upgrade, but for now they seem to be doing just fine.

I put a little glue in some of the joint even though it probably wasn’t necessary. 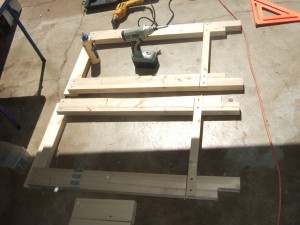 Here you can see the legs assembled. The leftover pieces from the rabbets I used as the lower brace and saved from having to cut into another stud.

I nipped off the corners for the feet even though it wouldn’t really make much of a functional difference. 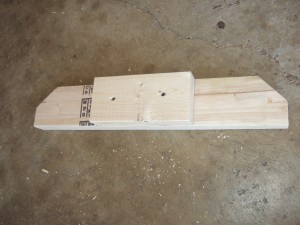 The other block screwed to the foot piece will help hold it in alignment as well as give added stability.

And here’s the stand all finished! 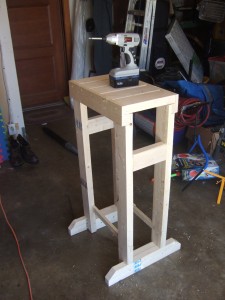 Posted by admin on March 30, 2011 with 2 Comments
in Uncategorized

The weather has certainly not been cooperating here lately for me to be able to pull out the powertools and start another project. I don’t really care for doing woodworking in the garage with the door down without being able to capture all the sawdust and keep it out of my face.  Hopefully the sun will come around again soon.

In the meantime, I’ve been planning a really simple project for a printer stand for my work made from four 2×4’s.  Here’s a sketchup drawing of it which I hope to start on the first chance I get: 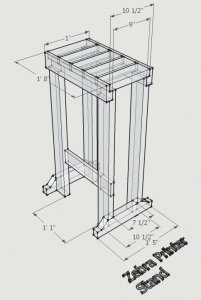 The stand will hold a medium size label printer. It is a pretty tall stand in order to bring the printer up to the level of the roller/conveyors where the packages will be.

I am debating about whether to include the lower brace to help stabilize the legs… I only drew in one of them.  In fact, it probably isn’t really needed, but I suppose I could add a little shelf in there in case they wanted to store extra labels.

Posted by admin on March 5, 2011 with No Comments
in Outdoor Projects

My brother and I tore into the beehives today and pretty much got them completed.   That is all except for the legs and lids, which he is planning on taking care of himself.  We ended up spending most of the morning and afternoon working on them and made a lot of sawdust in the process.   Maybe it is time for one of those nice dust collection systems?  Anyway,  we started by cleaning up the glue squeeze out from the glue-ups we had put together last week. 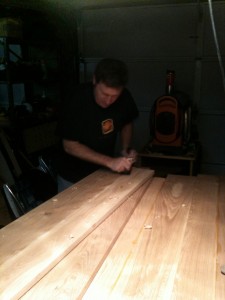 Dried glue doesn’t come off as easy when it is thoroughly dried. We started of with using a hand plane but decided to use a sander to save time.

After cleaning up the glue, we sent the boards through the thickness planer a few times.  It definitely gave my planer a run for the money.  I could hear it slowing down as the oak is older and very dry.  We were planing pretty much the full width (>12″) that the planer is made for.   Most of the boards needed to be 12″ in width so we ripped them down to the correct size. 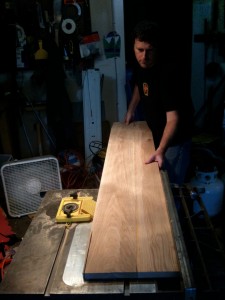 The old Craftsman brand table saw is still working. Here we’ve flipped the featherboard around to keep some even pressure against the fence.

After we got them all ripped to size, we needed to cut them to length.  I remembered my old cross-cut sled I had made quite a while back for another project.  It would speed up the cuts and save us the trouble of using the chop saw and having to flip the board around, repeat the cut from the other side and hope the kerfs line up. 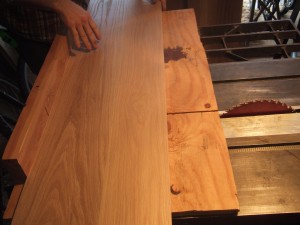 The sled isn’t the most accurate thing as the runners (not pictured) seem to have shrunk with time that ride in the slots in the tablesaw. I have a sheet of HDPE which might make a better set of runners. Definitely a project for another day.

After finishing cutting all the main boards to length, we set to cutting the trapezoidal boards from plywood that make up the follower boards.  These follower boards apparently have some sort of purpose in helping control circulation, delineating parts of the hive and preventing the bees from swarming – something beekeepers try to avoid where a portion of the bees decided to leave the hive. 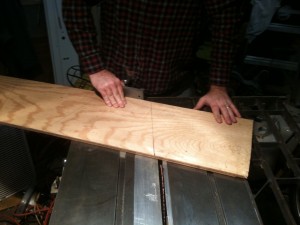 Angled cuts using the miter gauge for the follower boards.

We put a little larger than a 3/8″ dado in the top bars that will receive the follower boards. 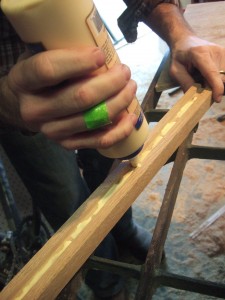 Putting a bead of glue down in the follower board’s groove.

Here’s a board inserted. 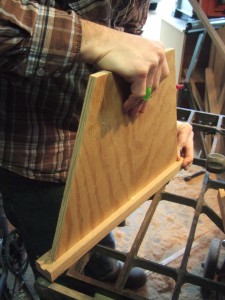 A perfect fit of course!

We are making two hives.  One for my brother and one for my sister, so two sets of everything! 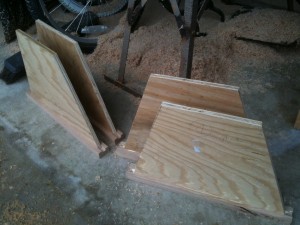 Look at all that sawdust behind them on the floor, in fact it is hard even to see the floor at all..

Now with the follower boards cut, we set to making the top bars. 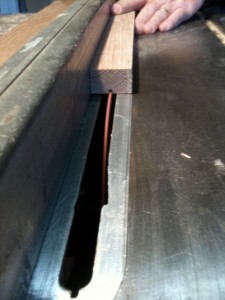 Here we are putting in a small 1/8″ square groove down the center of the top bars. Some starter wax will be melted into the void and the bees will eventually attach their combs to this portion.

We made quick work of cutting the top bars to length.  A wood clamp is what we used as a stop block to make sure all the top bars were the same length. 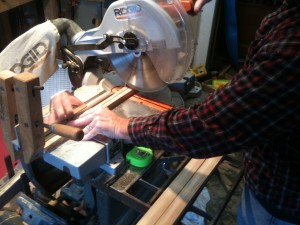 I’m making sure my hands are kept safely away from that blade!

Once we were done cutting the top bars (I think there were 50 total for both hives), we began building the main body of the hive. 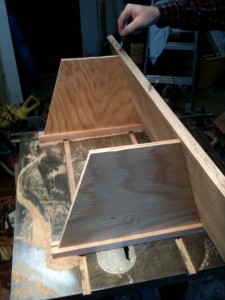 Now to start assembling and make sure everything lines up.

I like when assembly begins… that’s when I feel like we are really starting to make progress. 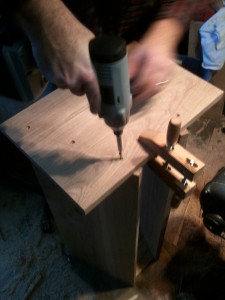 Using a follower board as a guide, we countersunk holes in the end boards and screwed them to the side boards.

The hive will be nice and solid and the oak should make a long lasting hive.  We used corrosion resistant deck screws to attach the end pieces. 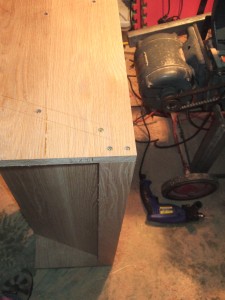 After the ends were screwed on we have added some side rails to keep the top bars nice and contained.

Here’s two pictures, one without and one with nearly all the top bars in place. 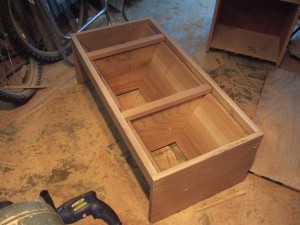 Without top bars, only the follower boards have been inserted.

With the top bars: 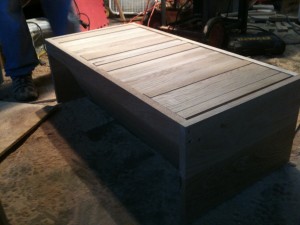 Almost done with the main part of the hive. 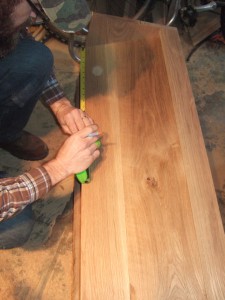 Here my brother is measuring for the entry holes to the hive for the bees.

I just love using the forstner bit.  It makes such a nice clean hole when compared to a regular spade bit. 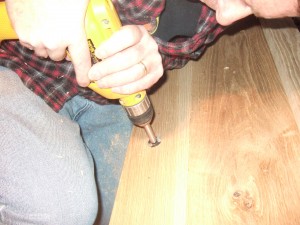 The first few I drilled through, but that oak nearly 7/8″ thick was heating up the bit quite a lot. We eventually got a little smarter and drilled about 4 or 5 smaller relief holes so the forstner bit didn’t need to remove as much material. That really helped out a lot. 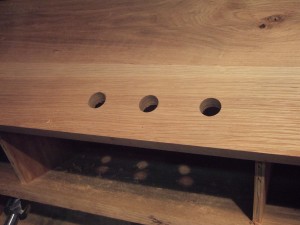 All three holes drilled. I guess corks are typically used in the holes to limit ingress and egress to the hive.

Here, the main part of the hive is completed. 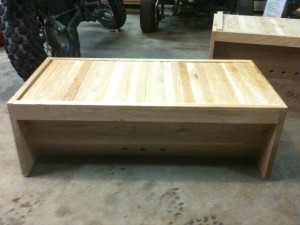 The second hive is partially visible in the back.

It was getting late already.  That’s always how these projects seem to go.

My brother will finish the legs and top cover at his place.  I’ll try to post a picture of the fully completed hive once he has that all done.